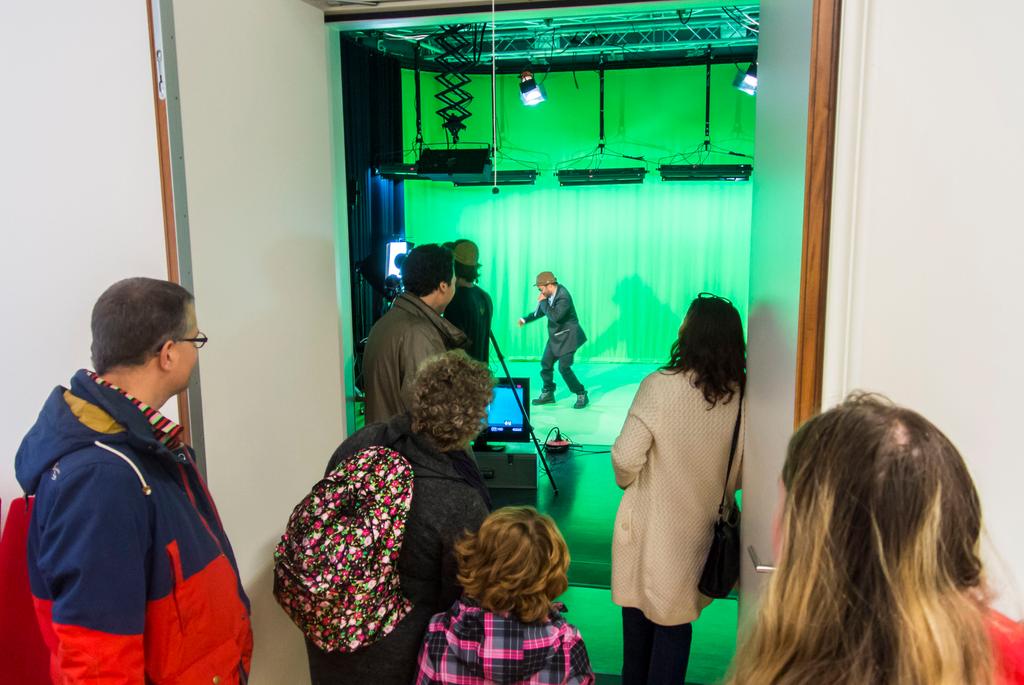 The ‘Rap Karaoke in a Costume’ event was a big success! I hosted the event during the Open Day of the Minerva Art Academy on Saturday November 7th. Everybody was welcome to give a (lip sync) rap performance in the Green Screen Studio while simultaneously express a positive or a negative word to review a move.

What is this all about? The ‘Rap Karaoke in a Costume’ event is part of my current project: Rapping.Reviews. This is a website with over 13.000 computer generated rap battles made from IMDb movie/tv series reviews. The lyrics will be ‘rapped’ by a computer voice (the eSpeak speech synthesizer) and have been combined with a hip-hop beat, the video trailer, and a rap performance to present you movie reviews in a new way.

This is an example video of how a rap battle could look like:

One rapper presents the positive opinions of the movie and the other rapper presents the negative opinions. Because of this I want a variety of rappers that also look like a positive or negative word that could be used to review a movie. The words should in a way be synonyms to ‘good movie’ or ‘bad movie’. Some examples are ‘Badass’, ‘Beautiful’, ‘Cool’ or ‘Shit’, ‘Weak’, ‘Regrettable’. I made a spreadsheet containing many positive and negative words that could be used to review a movie (using a.o. Urban Dictionary as a reference). I would like to visualize as many of these words as possible with original rap performances! That’s where the ‘Rap Karaoke in a Costume’ event comes in.

For weeks I have been gathering clothes and attributes that could be used to express a positive or negative opinion about a movie/tv show. For example a huge cardboard box to express poor and a toilet to express that the movie is shit.

I’ve also made promotion for the event on CouchSurfing, Facebook, by standing at the main entrance of the Minerva Art Academy with a demo of the site and with a small interview on the HanzeMag website. On Facebook I posted a few examples of ways to express words. During the open day there were posters announcing the event.

I have also been practicing in the Green Screen Studio and got some valuable tips from staff and fellow students on how to properly set up the lighting for green screen recording. After a full day of setting-up on Friday with the help of Kayleigh and my brother Ko, it was finally time to start recording comical rap performances!

The classroom attached to the film studio was transformed into some kind of second hand store, mostly with my own clothes! Face paint was available too. And all the screens in the room showed a preview version of the Rapping.Reviews website, so that visitors could see in what context the performances will be used.

After a day of hard work the result is a total of 27 rap performances, of which 12 express negative opinions and 15 express positive opinions. The performed negative words are: Exhausting, Trash, Poor, Pathetic, Boring, Shit, Dumb, Pain in the Ass, Criminal, Booo, Sad, Red/not. The performed positive words are: Rocks, Chapeau, Killer, Sweet, Smooth, Love, Golden, Relax, Swag, Respect, High five, Green/positive, Fabulous, Hot, Hallelujah. Most of the performances have been done by my Ko, Kayleigh, Sam and me but 10 performances have been done by visitors of the event.

It has been a busy few days but I look back to the event with good feelings. My team (Ko, Kayleigh and Sam) were very enthusiastic. It was a lot of fun and the event has received a lot of positive feedback from visitors and Minerva staff. For an open day it is a successful event, because it is entertaining, demonstrates the possibilities within the Art School and involves the visitors. I’d like to do it again during the next open day in February, but then try to take the visitor involvement to the next level.

The open day was the first time I have publicly shown the Rapping.Reviews website and allow users to interact with it. This has been a good experience and a confirmation that the concept is appealing. Many visitors understood the humor, could laugh about the imperfections in the automatically generated lyrics and see the potential the website has. This motivates me to keep on working on this project. Some people stayed for a while, looking up many of their favorite movies to see what the rap had to say about it. The fact that the website has rap battles for almost all movies is of course the most appealing part of the site.

The next open day I would need more assistance in order to get better quality footage. My team mostly helped with the ‘intake process’, dressing the participants and sometimes acting guidance during the performance. Since everybody could walk in and the wardrobe was open, I definitely needed three people on those tasks. But I did not have any technical assistance during the event, so I had to operate two camera’s, the lighting and direct the participants. As a result, some shots were not focussed correctly because the subject had moved away from the camera after focussing. I hadn’t noticed this as I was concerned with directing the rapper. Also in some shots the lighting should have been adjusted for better results.

Since I got the idea for the event only 3 weeks before the open day, it was hard to fully integrate with the Open Day program. One of the three weeks was a vacation week, so not much could be arranged then. The next open day it would be important for the tour guides to know about my project. Also it could probably be (better) described in program books or on the open day website.

The event was a new and educating experience for me. I didn’t have previous experience with professional studio equipment, nor have I ever shot in a studio before and green screen filming is new for me. I liked having a team and being the director.

The rap battle lyrics have been ‘crowd sourced’ and I wanted to do a similar thing with the rap video performances. The idea of the event was to see if it is possible to utilize spontaneous improvised ‘rap’ performances for my Rapping.Reviews project, preferably with input from as many people as possible. To a certain degree it has been successful. Not all performances are usable, because it was hard for some people not to laugh (I can’t blame them!). Others were really good at keeping their role during the rap performance. But I was a little let down by the amount of people that showed up, even though 18 people chose ‘attending’ on Facebook. Also none of my fellow students gave a performance. So in the future I would like to have performances from more people also using a more diverse set of clothes and attributes. Some clothes/attributes have been used for different performances. If (at least some) participants would prepare a role before attending the event, then the result will be more diverse. Perhaps there is the possibility to integrate the expression of positive and negative words (by means of an object, clothing, a body/face painting or acting performance) into an exercise or project for Minerva bachelor students. It would also be interesting to explore collaboration with amature stand up comedy or acting groups. These people would perhaps be excited about appearing on the Rapping.Reviews website and I could organize a more structured shoot. An other option is to publicly announce that everybody can send in their own rap video’s - true crowd sourcing. However, this would probably work best if I have a few examples and a working website. So I’ll work on that first. 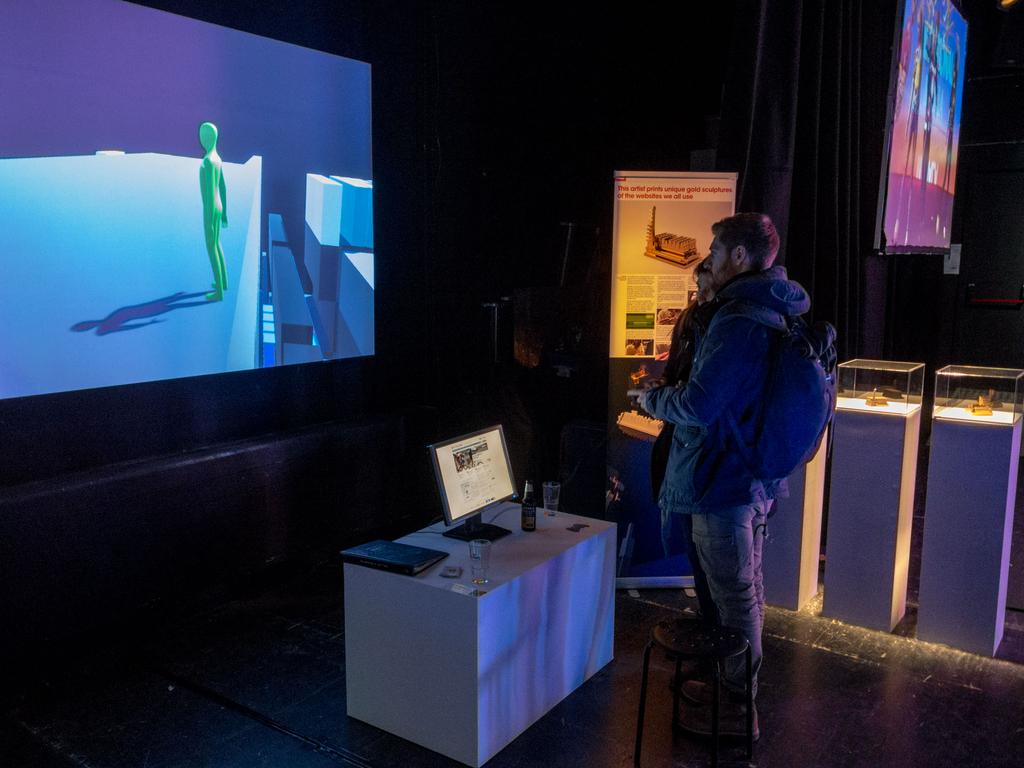 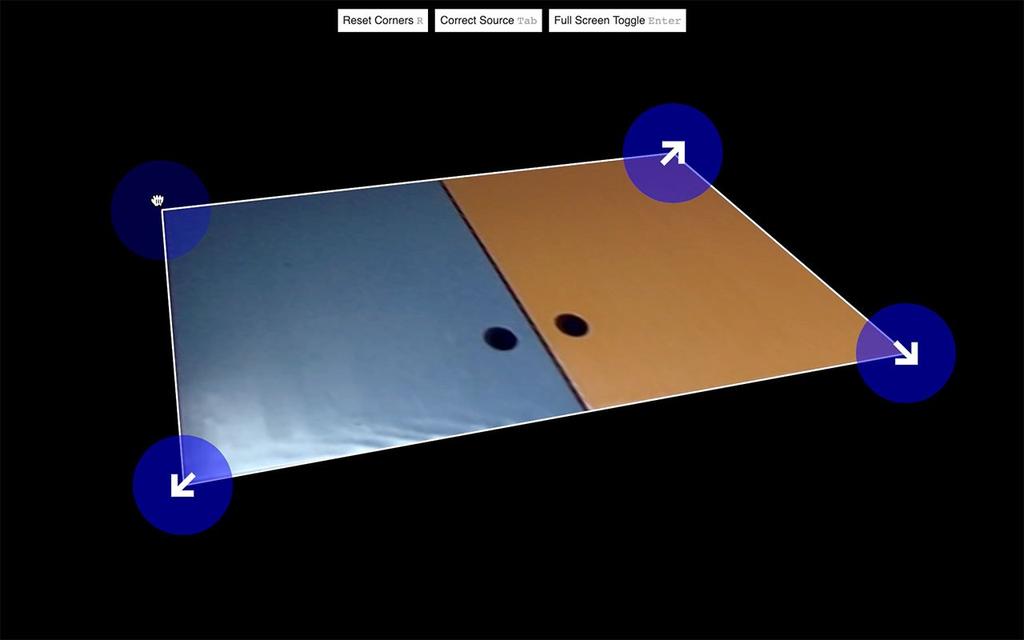